Hello, Sewers! This is Eva Garlick of Sew Much Good, back with another whimsical table runner for the Christmas holiday. (Remember Ms. Bindweed for Halloween? She’s got a new friend!)

Jingle Boots is a two-sided table runner that will add a little sparkle and kick to your holiday decorating. It is easy and fun to make with the step-by-step instructions included in the pattern. 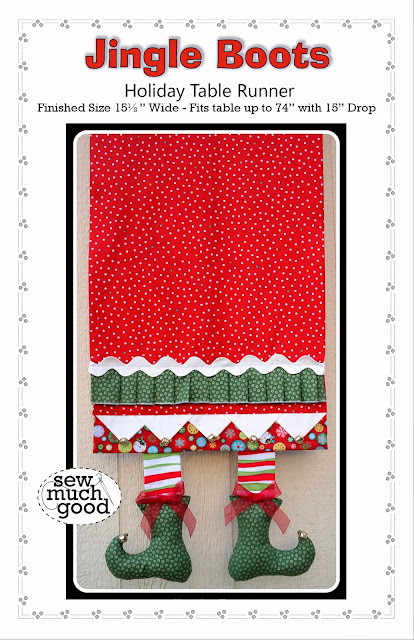 If your local quilt store doesn’t have this pattern, you can click on over to Sew Much Good to get one or pick one up from my Etsy shop.
PLEASE NOTE: This picture tutorial is meant to be used with the pattern instructions. Not all the steps are shown here. I have given the tips in the same order as the steps in the pattern.

Follow along here at SewTimeless as I give you some hints and tips to make this adorable runner using the following Timeless Treasures Fabrics: 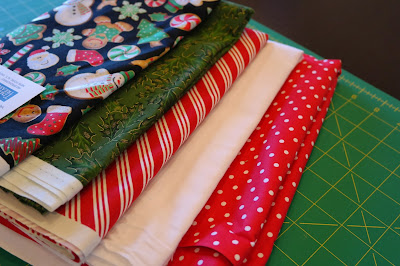 Let’s get started. The first step is preparing the main runner.
TIPS FOR THE MAIN RUNNER

Following the pattern instructions you will cut one or two pieces of the main runner fabric, across the width of your yardage. Whether you have one or two pieces will depend on the size of your table. (Since most tables will require two pieces that is what is shown in the following steps.)

Cut off the selvage edges to insure flat seams.

With the folded fabrics open, place them right sides together matching one of the short sides and sew together as per the pattern instructions. You will have one long piece. 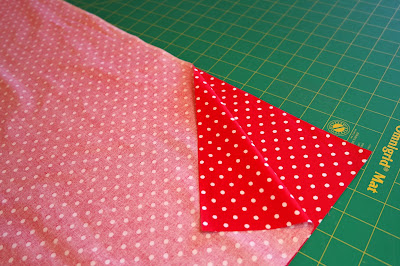 Press the seam open and refold the whole piece in half lengthwise, matching the center seam. Pin and stitch along the length to form a long tube with open ends.

You will next be pressing this long seam open and positioning it in the center of the runner.
To find the center quickly, with your tube flat and the seam to one side, finger press the fold for an inch or two. 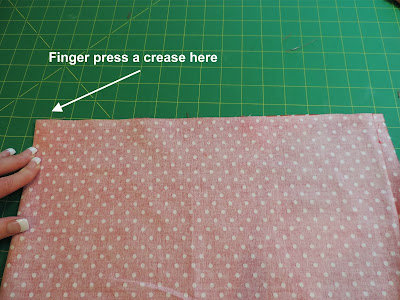 This will give you a center mark which you can then match up with the seam on the opposite side.
Center the seam and press it open. At this point your runner will look like the picture on the left.

The next step will be to trim the center runner to the desired length. Following the calculations in your pattern, you will be trimming some from each end. This keeps the seam centered in the middle of your table.
Rather than trim each end separately, fold the runner in half at the seam with the open ends together.
If you are using a rotary cutter and ruler, note the amount to trim and cut through both ends at once.

Now sew across the open ends marking and leaving a 6″ opening in one end to turn it. 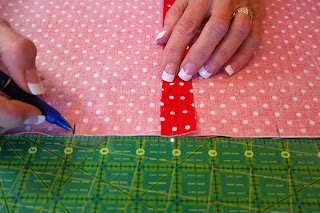 Before turning take the time to press the seams open on the ends. This makes things much easier once it is turned, ESPECIALLY for the seam allowance in the opening. To press the seams open on the end of your tube you will need to clip each corner as shown below. Put the scissor tip into the fold and clip down close to the stitching but not TOO close. This will release the seam to fold open.

Start with the seam allowance on one side and press it back. Then turn the whole piece over and press the other seam allowance back towards the runner. Repeat for the opposite end of the runner.
Use the 6″ opening to turn the entire tube right side out. Work the corners out flat and press all around.
To temporarily close the opening I use a WASHABLE WHITE GEL glue stick and run it along the inside edge of the opening. Pressing it lightly with the iron will dry it quickly and keep it in place until it is top stitched down in later steps.

TIPS FOR PREPARING THE BOOTS AND STOCKINGS

The pattern includes one boot pattern. Rather than copying it once or even four times I take it to my printer and make four copies.  This preserves the original. Just be sure the printer is not re-sizing the copy. Laying out all four copies at once lets you see that you are allowing enough space between them and they will fit across the width of your folded fabric.

This line will be on the inside seam of the boot and so will not show. Pens tend to drag less than a pencil when drawing on fabric and they create a defined dark line that is easy to follow for stitching. If you are concerned that the pen will bleed through and mark the table or mat beneath, just slip a piece of plain paper under the fabric in the area you are working on. If your fabric is too dark for a pen to be clearly visible, use a soap sliver recycled from the shower.
When you are done tracing remove the patterns, pin the two layers together in several places and rough cut the boots out. This means just quickly cut them apart without cutting too close. Notice that the top ONLY is cut along the pattern line.

Sew around the boots using a very short stitch length (1.0-1.5) as instructed in your pattern. Start at the right top and sewing around to the left side leaving the boot open across the top. Repeat for all four boots. When sewing around the toe it is better to round out the point a bit. This will make it easier to turn and still be pointed enough.
Next trim and clip around all sides.
Outside curves are clipped with a wedge and inside curves are clipped with a straight clip –  close to the stitching but not too close. Notice how the seam allowance is trimmed to about 1/8″ in the toe area.
Before turning right side out, press down 1/2″ along the top. This is much easier to do before turning than after.

Stuff the stockings lightly starting with a small piece of polyfil worked into the toe area. 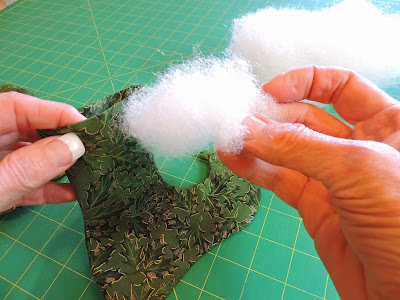 A small stick or dowel with a rounded or flat end can be a useful tool. Be careful with sharp ends that can poke through the seams.

Continue working with small pieces until the stocking is lightly stuffed to within about an half inch of the top. Repeat for all four boots.

Prepare the stocking strip as directed in your pattern but sew across ONE END of the tube to close it. 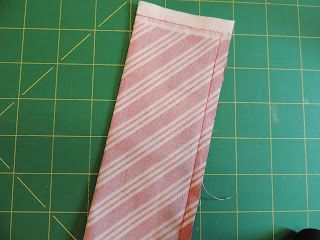 Press the seam open along the side and use a dowel, chop stick or eraser end of a pencil to push the closed end up and through to the other side.

No more safety pins to turn the tube!
Now just trim off the end that was sewn shut.

Press the sock tube with the seam running up the center back. Cut into four equal lengths. Insert one sock into each boot top about 1/2″ and pin in place.  Pin carefully matching the tops on the back and front through the fabric so that when you sew from the front you will be catching the top of the boot on the back. Make sure that you have two RIGHT facing boots and two LEFT facing boots. Top stitch through all layers.
TIPS FOR PRAIRIE POINTS
The white triangles on the color band are 4 1/2″ squares folded diagonally twice forming Prairie Points. The 10 needed squares are cut from a fat quarter. Rather than cutting out squares one at a time here is an efficient way to cut them with a minimum of motions.
Note: The following instructions are written for a right-handed person. Reverse the directions for cutting if you are left handed.
Start by folding the fat quarter into thirds. First fold the selvage edge into the middle.
Next fold the single layer side over forming three equal layers. Check to see that the selvage edge is snugged up against the fold on the inside.

Trim a small amount off the right side to create a straight edge as in show on the left below.
Carefully flip this over to the left side keeping the cut edges together. Lining the 4 1/2″ mark along this straight edge cut a strip 4 1/2″ wide through all three layers as in the picture on the right. 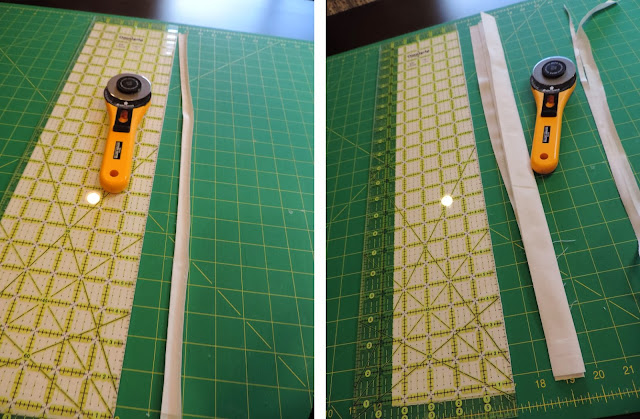 Square up one end by cutting off a small amount.
Again taking care not to shift the layers turn this end so it is at your left. Using a 4 1/2″ square up ruler or your larger ruler, sub-cut the strip into 4 – 4 1/2″ squares through all three layers. (You will have two extra squares.) OR you may cut three times through all three layers for 9 squares and cut the last square from a single layer as shown below.

When pressing Prairie Points remember that the diagonal fold is a bias edge and will stretch. Handling it with care will help keep things sharp and square. Bring the opposite corners together and hold securely. Using a hot DRY iron press firmly for several seconds. Do not scrub! There is a difference betweem ironing and PRESSING. Just PRESS.

The triangle should be flat and crisp with the corners meeting exactly. Fold in half again bringing the raw edges together.

Hold the corner points together securely and press as before. There you have a perfect Prairie Point! Flat and crisp!
TIPS FOR COLOR BAND
Cut one WIDTH of FABRIC (WOF) to the required size. Cut off the selvage edges.
Measure the required length and cut through both layers for two bands.

Fold each band in half lengthwise, right sides together and sew across the ends. Before turning right side out fold the seam allowance toward the band and press. Then turn to the right side. This will allow the corner to turn easily and press out flat and crisp. 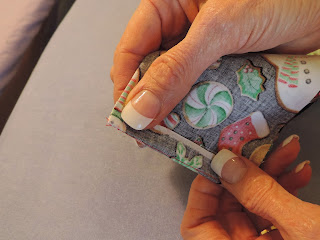 Mark each color band 1/2″ from the raw edge and put a mark in the center of the band. In this case the dark fabric is best marked with a white soap sliver. Use this guide line and the center mark to position the Prairie Points across each color band as shown in the pattern. Pin in place.

Set your stitch to a longer length (3.0) and baste the Prairie Points down. As you sew, the presser foot tends to push the narrow point out of place. Use a stiletto or other pointed tool to guide the points under the presser foot where your fingers can’t fit.
TIPS FOR ATTACHING THE COLOR BAND
Position the runner over the color band as instructed in the pattern. Top stitch the main runner over the Prairie Points and color band stitching close to the edge of the runner. Draw a line 3/4″ above the edge of the main runner with an erasable pen or marker.

Before stitching on this line turn to the runner to the back and tuck the corners under to be caught in the stitching. This will keep them from ‘peeking’ out to the front.
TIPS FOR THE PLEATED RUFFLE
This is a fun easy ruffle! NO GATHERS!
Mark the center of each ruffle strip. Pin it to the middle of the runner using the your last row of top stitching as the guide for the bottom of the ruffle. Pin each end even with the sides of  the runner. The ruffle will be laying floppy between the pins as in the image below.
Starting on the left side as you are looking at it in the picture, fold and pin 6 approximately 1″ pleats on each side of the center. The pleats should lay over toward the left side. This will allow you to sew with the direction of the pleats when they are placed on the machine.

Again, using a long stitch, baste the pleats down by sewing 1/4″ from the raw edge through all layers. 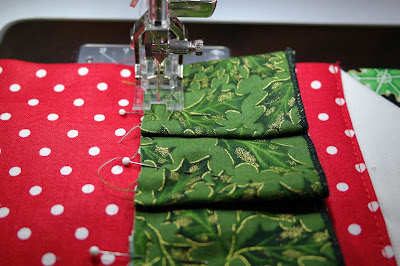 FINISHING
Attach the elf legs and embellish with bow and bells. You are ready to JINGLE your BOOTS!! HO HO HO! MERRY CHRISTMAS!! 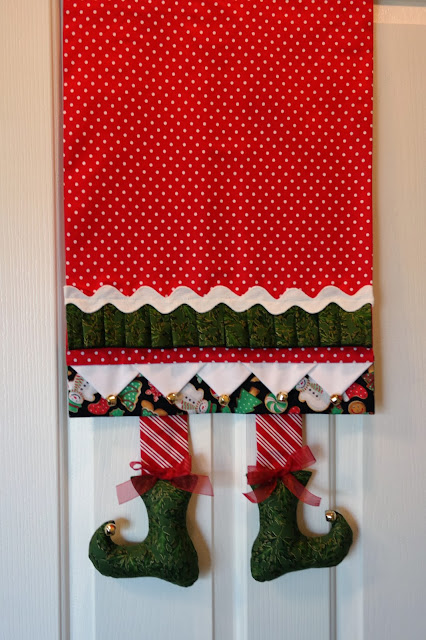 Let's Get Ready for a Handmade Holiday!